THE enlistment of colored men in the army and navy of the United States was authorized under the provisions of a proclamation by President Lincoln (known as the Emancipation Proclamation) published in General Orders, No. 1, dated War Department, Adjutant-General’s office, Washington, D.C. January 2, 1863, and the enlistment and organization of colored regiments was at once begun in several of the States.

SCT regiments were led by white officers, and rank advancement was limited for black soldiers. The Supervisory Committee for Recruiting Colored Regiments in Philadelphia opened a Free Military Academy for Applicants for the Command of Colored Troops at the end of 1863.  For a time, black soldiers received less pay than their white counterparts, but they (and their supporters) lobbied for equal pay.

EDGERLY, Charles E.B.—enlisted and mustered in on 26 Jun 1861 at age 22 as a Sergeant in Company E., 12 Infantry Regiment, MASS Volunteers for 3 yrs.  He was born about 1839 in
and resided in Newmarket and listed his occupation as that of Clerk.  Initially he was a drill and training sergeant with the 12th MA Infantry.  He mustered out 11 Nov 1862 with Disability Discharge.   He re-enlisted with a commission/promotion to Full 2nd Lieutenant in 18 Dec 1863 —in Company D, U.S. Colored Troops, 84th Infantry Regiment.  He mustered out on 28 Jul 1864 with a rank of Captain.  His name is on the G.A.R Memorial.   [See BIO]

WILSON, James – A Substitute – born in the West Indies enlisted and mustered in 7 Jan 1865 at age 23 as a Private in Co. K, 6th Infantry Colored Troops. Credited to Newmarket. He deserted within seven months on 18 Jul 1865 at Wilmington, N.C.

Each NH man was a volunteer appointed or enlisted for three years. The records of the colored troops at the War Department are incomplete and it has been found impossible to obtain full records in all cases.  New Hampshire had no regiment of colored troops, but nearly three hundred men were enlisted, credited to the quota of the State, and sent to the proper recruiting rendezvous, from which they were distributed to different regiments.  In addition to these, more than one hundred officers and enlisted men of New Hampshire regiments received commissions in the United States Colored Troops, the appointments being made and the commissions issued by the War Department. 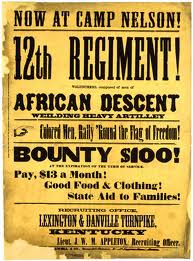 The Corps d’Afrique was formed in New Orleans after it was taken by Union forces. It was formed around the Louisiana Native Guards. The Native Guards were militia units raised in New Orleans. They were formed from property-owning free people of color, who had developed as a third class in New Orleans since the colonial years. Although they wanted to prove their bravery and loyalty like other Southern property owners, the Confederates did not allow them to serve and confiscated their arms. The Confederates said that enlisting black soldiers would hurt agriculture. Since the units were composed of freeborn creoles and black freemen, it was clear that the underlying objection was to having black men serve at all.

For later units of the Corps d’Afrique, the Union recruited freedmen from the refugee camps. Liberated from nearby plantations, they and their families had no means to take care of themselves and no place to go. Local commanders, starved for replacements, started equipping volunteer units with cast-off uniforms and obsolete or captured firearms. The men were treated and paid as auxiliaries, performing guard or picket duties to free up white soldiers for maneuver units. In exchange, their families were fed, clothed and housed for free.

Despite class differences between freeborn and freedmen, the Corps served with distinction at the Battle of Port Hudson. Its troops served throughout the South.

USCT regiments fought in all theaters of the war, but mainly served as garrison troops in rear areas. The most famous USCT action took place at the Battle of the Crater during the Siege of Petersburg. Regiments of USCT suffered heavy casualties attempting to break through Confederate lines. Other notable engagements include Fort Wagner and the Battle of Nashville. 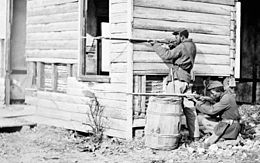 The prisoner exchange protocol broke down over the Confederacy’s position on black prisoners of war. Confederate law stated that blacks captured in uniform be tried as slave insurrectionists in civil courts—a capital offense with automatic sentence of death. USCT soldiers were often murdered without being taken to court. The law became a stumbling block for prisoner exchange.

Discussions were held in Washington as to the positioning of USCT soldiers on entering Richmond, Virginia, after its fall in April 1865. It was determined that due to the civilian sensibilities, the USCT soldiers would not be the first unit in; however, their presence was to be among the first units in.  Later USCT regiments served among the occupation troops in former Confederate states. 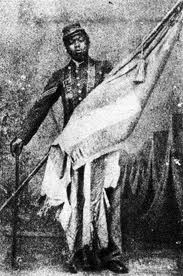 Massachusetts Volunteer Infantry Regiment. It showed their training and participation in several battles, including the second assault on Fort Wagner on July 18, 1863.  Although the 54th was not a USCT regiment, but a Volunteer regiment originally raised from free blacks in Boston, the film portrays the experiences and hardships that African-American troops went through during the Civil War.

The Stone School Museum, built in 1841, as a two-room schoolhouse, and now home to the New Market Historical Society, is located high upon Zion’s Hill on Granite Street.  Hours of operation are in our program of events and are on our web page and Facebook.  If you need further information, please call 603-659-3289 and leave a message or via email at newmarketnh.historicalsociety@gmail.com. Your inquiry will be returned as soon as possible.

The Historical Society still has books at early release prices:

If shipped — an additional shipping & handling fee of $4 applies.

All proceeds from the sale of this book by the New Market Historical Society help  the preservation of our collection.

or donate any amount

You can pay event admission here